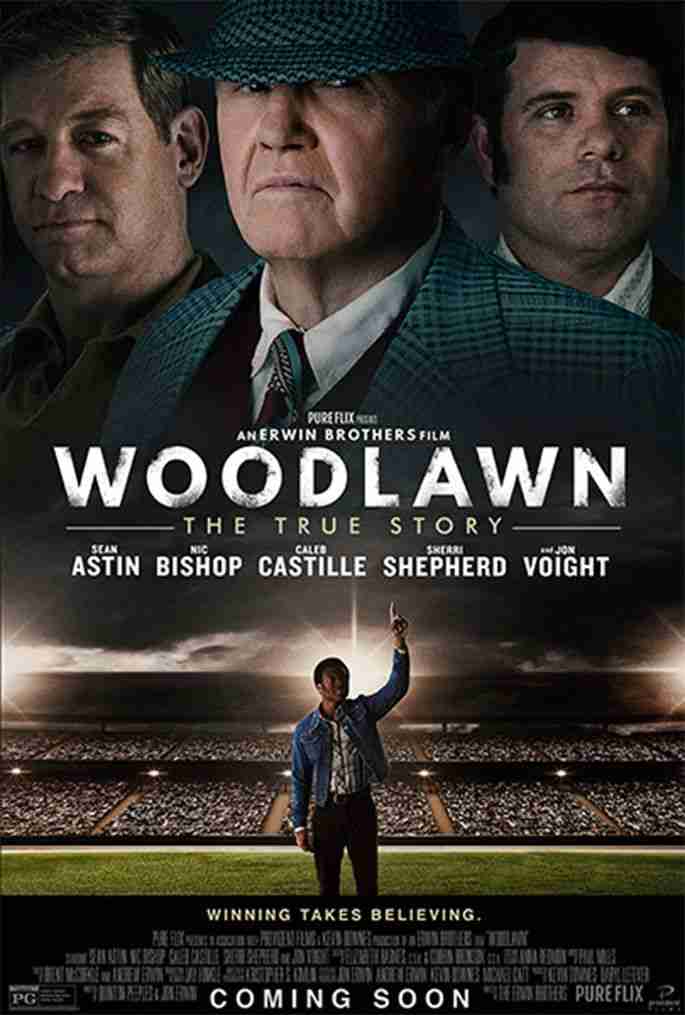 “Woodlawn” is the true story of one of the first high schools in Alabama to become integrated.  This initially caused a lot of friction, especially among the football players who did not want black players on their team.  In an effort to stop the fighting, a local evangelist makes a request to speak to the Woodlawn football team and the coach reluctantly agrees.  After an hour long talk the evangelist, Hank, is able to convert the entire team into followers of Jesus.  At this time in the early seventies, what was known as the Jesus Movement was in full swing and this is a grand example of that movement’s power.  The evangelist, Hank, continues to mentor the team with Bible studies after practice and the black and white players work together to turn in an unexpected winning season.  One black player, Tony Nathan, who is an amazing talent, turns out to be the star and is courted by legendary university of Alabama coach Bear Bryant.  The following season starts with a summer practice that includes the cross-town rival team and all the members of that team end up being converted to followers of Jesus as well.  In the end, the Woodlawn coach is threatened with termination if he continues to pray with his team before games but in the play-off game with the cross-town rivals who are also believers, they recite the Lord’s Prayer with the entire stadium in defiance of the school board.  Tony Nathan goes on to play for the University of Alabama and the Woodlawn High School coach ends up selling insurance; however, before the credits roll it is revealed he later returns to coaching.

This is a story well told.  For believers, this is a joyous celebration of what God can do: The whole team is converted, they then have a winning season, a star player is born, the bitter cross town rivalry is dissolved into respectful sportsman-like play – all because of Jesus. If I didn’t know it to be a true story I would say it’s too contrived – but it’s apparently all true. Keep in mind this is a story about football; so if you’re not a football fan it might not be for you.  Ultimately, this is a story about God working in the lives of a group of young people and how that empowerment changes a community.  Overall, I think most followers of Jesus Christ will find this story inspiring.