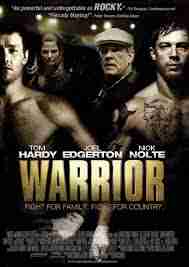 I was watching an interview with Pastor Erwin McManus, the founder of the Mosaic church in Los Angeles.  He was talking about his experience discussing faith-based movies with the powers-that-be in Hollywood.  His interpretation of the conversation was that Hollywood wanted formulaic, cookie-cutter, faith-based movies and was not interested in scripts with a deeper understanding of the human spirit – the kind of movies McManus was interested in writing.  As an example, McManus sited a movie from 2011 titled “Warrior.”  In his view, this was the best faith-based movie made in the last decade – not because of its dedication to sharing the gospel, but because of its portrayal of the human spirit.

Warrior is the story of two brothers, estranged from their alcoholic father, who find their way back to each other through their shared interest in mixed martial arts fighting.  Nick Nolte plays the recovering alcoholic father and was nominated for a Best Supporting Actor Oscar for his portrayal.  He is joined by Tom Hardy and Joel Edgerton playing the two brothers.  This is a suburb cast, beautifully directed, working with an excellent script; however, calling this a faith-based film is a bit of a stretch.  This is a boxing movie (MMA).  This is a boxing movie that is better than all 8 Rocky movies.  The story told in Warrior is far more compelling.  As Pastor McManus explained, this is not a story about someone finding faith; it is the story of the human spirit.

Warrior delivers a powerful depiction of abandonment, betrayal, disappointment, and the damage it inflicts on the human spirit.  The MMA cage matches become a metaphor for fighting off the demons of human frailty.  The two brothers were pulled apart as teenagers when their alcoholic father left with one, leaving the other alone with his mother, who later died.  There is anger and resentment inside each of these men and the only way to resolve the issues is essentially a cage match.  The only element of spirituality is the fact that the father found sobriety through his faith in Jesus Christ.

This is a great film that I highly recommend, but it’s not your typical faith-based movie.

← An Unstoppable Force
I Refuse →