The Secrets of Jonathan Sperry 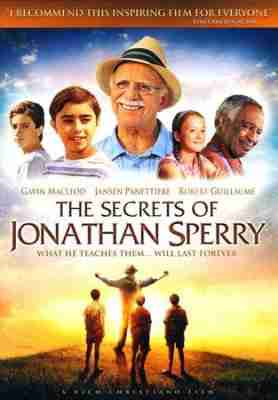 Dustin, Albert, and Mark are twelve-year-old friends spending their summer together in a small town in 1970.  Dustin has a crush on Tanya and gets his friends to help him figure out a way to get her attention.  He is way too shy to even talk to her.  Dustin’s friend Albert thinks it’s a bad idea anyway, since Nick, the local bully, likes Tanya also.  When the three friends are having pizza together, Nick makes his presence known by stealing a slice for himself.  There’s nothing they can do since Nick is much bigger and has his friend to back him up.

Dustin mows lawns to earn spending money and is asked by a cheerful senior citizen, Jonathan Sperry, if he would be interested in mowing his lawn.  Dustin is delighted to get the new business and becomes quick friends with Mr. Sperry.  During their time together Mr. Sperry begins talking to Dustin about Jesus.  Soon, Albert and Mark join Dustin in Bible study with Mr. Sperry.

The Bible study with Mr. Sperry grows to twelve boys; and to return the favor Dustin, Albert and Mark take Mr. Sperry out for pizza.  The boys have told Mr. Sperry about the bully, Nick, and he makes an appearance during the pizza outing.  Nick is rude to Mr. Sperry and then gets a big shock when Mr. Sperry tells him he used to know Nick’s father who was a Godly man.  Nick is clearly impacted hearing the news of his now deceased father.

Nick ends up visiting Mr. Sperry to hear more about his father and over time accepts Jesus as his Lord and Savior and seeks forgiveness from those he has harmed.  With Mr. Sperry’s help, Nick becomes friends with Dustin, Albert, and Mark.

Dustin finally gets the courage to deliver a note to Tanya, but rather than asking her out in the note he instead tells her about Jesus.

When Mr. Sperry dies unexpectedly, Dustin is devastated.  His mother tries to console him but it’s no use.  Then, out of nowhere, Mr. Barnes shows up at Dustin’s house and tells him he will start paying him to mow his lawn and that he knows Mr. Sperry was the one who paid him before.  Mr. Barnes also tells Dustin that he has started reading his Bible as Dustin suggested.

Dustin’s mother is touched by Mr. Barnes appearance and shares with Dustin that Mr. Barnes was the drunk driver that caused the death of Mr. Sperry’s wife.  Dustin is amazed that Mr. Sperry was paying him to mow Mr. Barne’s lawn.

As Dustin contemplates the life of Mr. Sperry, he realizes the way to honor him is to continue the Bible study group.  Dustin gets the twelve boys back together and begins teaching them exactly the way Mr. Sperry did starting with the early lesson the newer boys never heard.

“The Secrets of Jonathan Sperry,” is a nostalgic look back at a simpler time in a small town setting that leaves plenty of room for close relationships.  The story moves along at a slow comfortable pace with just enough twists and turns to keep it interesting.  This is a beautifully produced film with good acting and a nice musical score.  There are several touching moments filled with real emotion created by well-developed characters.  I think this story would play well to pre-teens but may be a little too simplistic for older teens.  In either case, it may help to have some discussion about what life was like in 1970 before watching.  Overall, this is an enjoyable story that will play well with a family that appreciates a story about Christian faith.

← Following God’s Will
The Rolls Royce of Religion →