The Resurrection of Gavin Stone 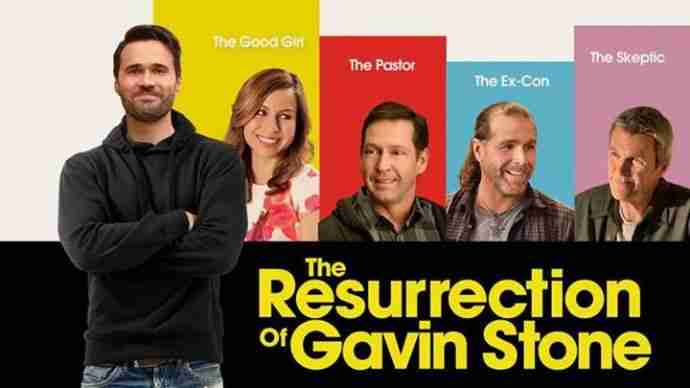 “The Resurrection of Gavin Stone” is the story of a popular child television star who grows up to be a wild partier going in and out of rehab and having a hard time finding acting work.  After one particularly crazy night of hotel destruction, Gavin is sentenced to 200 hours of community service at a church in his hometown.  Gavin is not a Christian and the idea of working at a church is repulsive to him but it’s the quickest way for him to move forward.

When Gavin returns to his hometown for his community service project, he reconnects with his estranged father who is now alone after the death of Gavin’s mother.  Gavin ends up moving into his old bedroom while working on his church service.

Gavin shows up for his community service at a very large church and is immediately put to work mopping bathrooms.  When he notices the church is getting ready to do a stage production of the story of Jesus, he tells the church pastor he could be a big help.  The pastor is open to having a professional actor join the production but they only allow Christians to participate in church productions.  Gavin sees an opportunity to change his community service from mopping to acting and he lies to the Pastor telling him he is a Christian.  The pastor only half believes Gavin but gives him a chance anyway.

Gavin turns to Google to learn how to become a Christian and quickly adapts to the role.  Over time, the sincerity of the people Gavin is working with at the church begins to soften his heart.  He is especially interested in making a connection with the director of the play who happens to be the pastor’s daughter.  The more time Gavin spends with other church members, the more he begins to seek the kind of joy they all have knowing God.

In the end, Gavin has to make a choice between leaving the small church production to land a big opportunity in Hollywood or stay to fulfill his commitment.  His first instinct is to immediately fly to Hollywood but the emptiness of that choice quickly pushes him back to the church where he finally gives in and accepts Jesus as his Savior.

This is a fun film with a big heart.  Gavin’s story is a grand illustration of the difference between those who live for this world and those who live for Jesus.  Brett Dalton does a fantastic job playing Gavin Stone and is supported well by Anjelah Johnson-Reyes as the pastor’s daughter.  The dynamic between these two characters carries the story forward in a constant struggle between selfish living and Christian living.  There’s a good bit of well-played humor in this film as Gavin stumbles his way through pretending to be a Christian.  Overall this is a well-produced movie that easily keeps the story moving along at a good pace.