The Old & The New 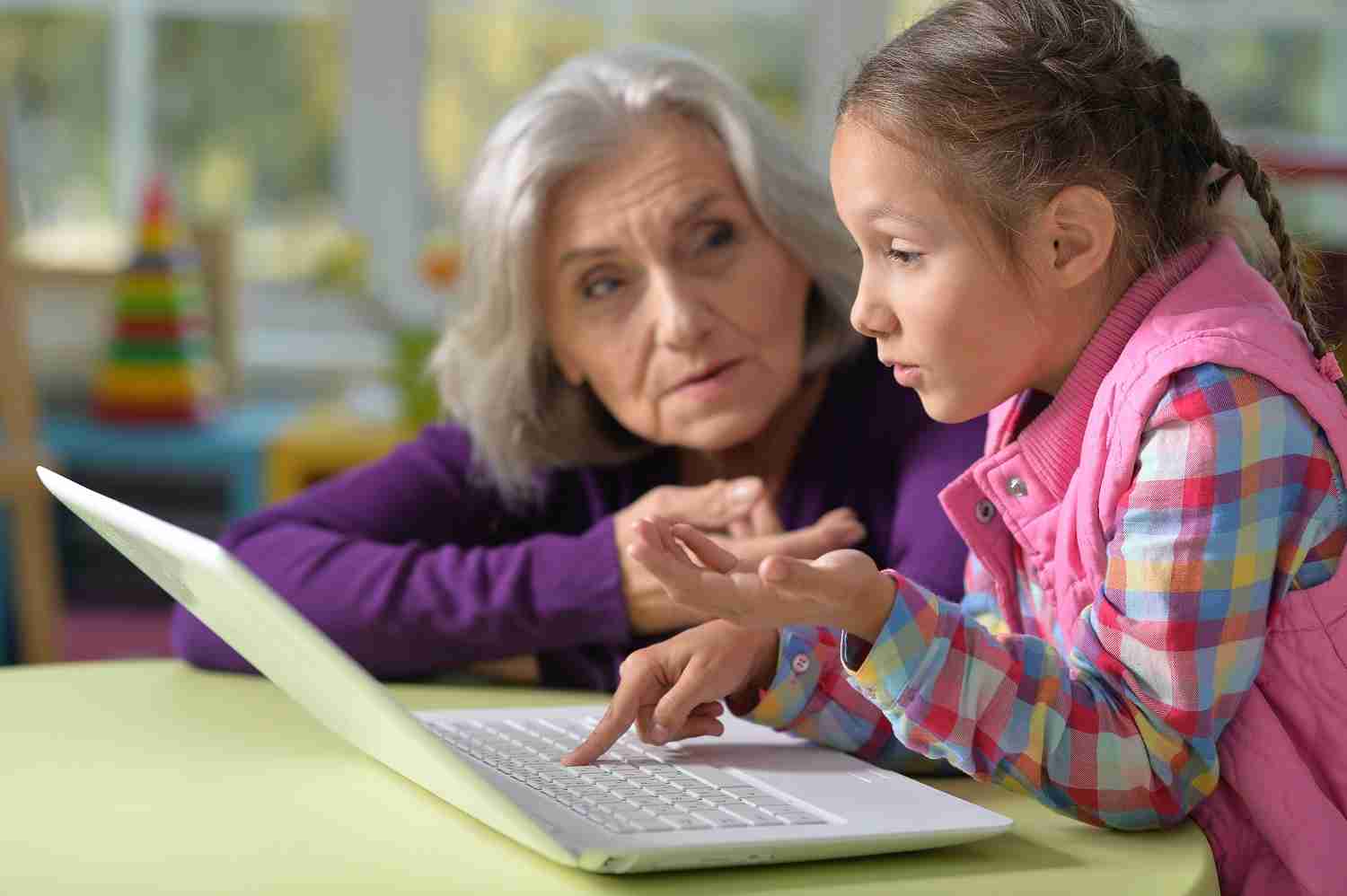 CHAPTER EIGHT in the story of college students Josh & Emily discovering lessons from the Parables of Jesus.

It’s up to followers of Jesus to teach the Old Testament truth about God as well as the Gospel of Jesus Christ.

The Old & The New

Emily was spending the day bridging the gap between technology and the senior citizen population at the local assisted living facility.  In the corner of the comfortable recreation room, was a long desk with four computers.  While other seniors in the nicely appointed rec room played board games and engaged in routine conversation, Martha had enlisted her friend Alice to join in a mission to overcome cyberspace.  With Emily as their instructor, these two playful ladies in their eighties made a bold attempt to retrain their brains to understand all things digital.  This day’s lesson was everything you need to know about email.

Martha’s hand was on the mouse.  Her email appeared on the monitor typed up and ready to go.  Emily was on her right side pointing the way.  Alice was on her left side watching, learning, encouraging.

“Now all you have to do is click on send,” Emily instructed.

Martha was full of the same energy a kid has on their first trip to Disneyland.  Alice was poised to experience the thrill of that first big drop on a roller coaster.  This was a big moment for these ladies.  With a click of the mouse, Martha’s email drafted off the computer screen on its way to the recipient.
“Oh!  There it goes!” she said with wide eyed amazement.

“Whatever space, it’s a lot easier than licking a stamp.”

“I never liked the taste of stamps!”

Martha settled into her chair having completed this major accomplishment.  Alice leaned over Martha to connect with Emily on her other side.

“Thanks for walking us through the process, Emily.  Kids today do this stuff without even thinking.  It’s a major science project for me and Martha.”

“That’s true,” Alice agreed.  “And they use all that crazy shorthand.  I doubt most kids today know how to construct a real sentence.”

Emily enjoyed hearing another generation’s point of view.  She wanted to connect with Martha and Alice in a meaningful way, but felt like she was stranded on a ship that was drifting away.

“I agree with you guys,” Emily said.  “Long-form personal communication is a dying art.”

“Well, we need to call nine-one-one before it’s too late,” Alice demanded.

All three women were amused by Alice’s outrage.  As Emily enjoyed the moment, her mind began to wander.  A plan was formulating in her head.

On Sunday afternoon, after all the church services were over at Faith Bible Church, Emily and Josh had gathered together a selected group of sixth graders in one of the Sunday school classrooms.  Two girls and two boys.  They were attentive, eager to please kids.  Their eyes were glued on Josh as he sat down at a small table to join them in a discussion.

“First of all, thank you for volunteering to help with Emily’s project to connect with seniors,” Josh began.

Emily then took over from the opposite end of the table.

“Some of the seniors living at the senior center don’t have any children or grandchildren to talk with and they love hearing from children because it helps them feel young.”

The gears in the little minds sitting with Emily and Josh immediately started turning trying to connect with Emily’s opening statement.

“When my grandmother comes over, she’s always telling us to be quiet,” Brett offered.  He was a disheveled looking kid who appeared ready to jump up and bolt to the playground at any moment.

“That’s a different situation, Brett,” Emily concluded.  “These seniors would just like it if you would send them an email and tell them about what’s going on in your life.”

An impeccably dressed Olivia was seriously confused.  “Can’t we just visit them?” she asked.  “Why do we have to write an email?”

“Because these seniors like reading letters,” Josh jumped in to explain.  “It’s the way they used to communicate with their friends when they were young.”

Tessa, a thoughtful young lady with a big smile suddenly realized the need.  “If writing letters makes them feel young and happy, we should do it!” she announced.

“Why don’t we just send them a text message?” Andrew, the most serious member of the group inquired.

Brett, responded to Andrew while looking out the window at the playground. “My grandmother says text messages are just a way to avoid talking to people.”

Emily listened to Brett and glanced over her shoulder to see what he was looking at outside.  Realizing his attention span was narrowing, Emily looked him in the eye and appealed to him directly.

“Some of these seniors don’t even have phones that receive text messages, but all of them really like reading long letters.  Can you write a long email about with you did this week, Brett?”

Emily’s direct request had Brett climbing on board.

“My teacher says if you can say it you can write it, so I’m just going to say it and then write it down,” Brett offered.

Emily had with her a stack of papers, each with a picture of a senior from the assisted living facility.  Below each picture was a paragraph of personal information about that senior.  She slid the papers one by one across the table to the kids.  Women for the girls.  Men for the boys.

“This is a picture of your email pen-pal and a little information about who they are.  Their email address is right at the top.  We’re asking that you send them a long email once a week for the next eight weeks.”

The kids all looked over the picture of their pen-pal.  Josh watched, not certain this was a good idea.  Emily felt confident and it showed in the smile on her face.

“What if it is the queen of England?” Andrew asked, not really thinking.

“I don’t think the queen is living at the senior center,” Tessa concluded.

The next eight weeks went by quickly for Emily.  Emails were flying back and forth between sixth graders and seniors.  The seniors loved the interaction.  The kids were having fun.  Josh, who was never sure this project would take off, was thrilled by the results.

At the end of the project, in the same Sunday school classroom where the pen-pal assignments were handed out, Emily, Josh and the kids were together again for a final meeting.  They sat at the same small table with Emily on one end and Josh on the other.  The two girls, Tessa and Olivia, sat on one side.  The two boys, Andrew and Brett, sat on the other side.

“You guys have been fantastic email writers,” Josh began.  “And we have a special surprise for you today.”

“But before the surprise,” Emily said, “tell me what you guys think about writing the emails.”

“I couldn’t wait to hear back from my pen-pal,” Tessa said filled with joy.  “It was fun!  I want to keep doing it.”

“You certainly can,” Emily said with a smile.  “You don’t have to stop if you don’t want to.”

“I learned a lot from my pen-pal,” Brett said.

“What’s something you learned?” Josh asked.

“I learned that writing letters can give you more time to say what you want to say than a text message.”

“That’s for sure,” Emily agreed.

Olivia was the most introspective of the group.  “I thought writing letters was the old, slow way to communicate, but it’s really way better than constantly being on your phone answering every text,” she said.

“So let’s get to your surprise,” Josh announced.

Before Josh could finish his sentence, Emily was already on her feet opening the door to the group of four senior pen-pals.  Martha and Alice came through the door first, followed by two senior men that immediately connected with their pen-pal friends Andrew and Brett.  Tessa recognized Alice as her pen-pal and helped her into a chair so they could talk.  Olivia and Martha both smiled as they realized their connection.  Martha reached out for a handshake, but Olivia countered with a warm embrace.

“The young and the old have come together for a meeting of the minds,” Martha announced to the group.

“I don’t think we’d have anything in our minds if it weren’t for the old people, “Andrew responded.

“That may be true,” Alice said, “But all the fresh ideas come from young folks like you.”

Olivia took in the conversation with a good measure of thought.  “The young and the old work together,” she said.  “We all need each other.”

“Yes we do,” Martha agreed.

Josh and Emily drifted into the background as the pen-pals all began to share with each other like long lost friends.  God was at work in the room.  No question. ← Your Place in God’s Kingdom
The Church in America →