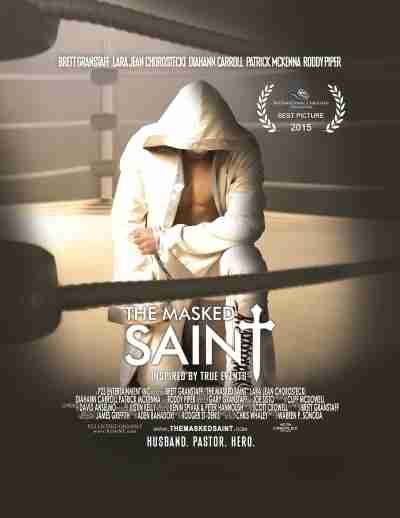 The Masked Saint was adapted from a book of the same name that is loosely based on the life of a pro wrestler who left a ten year career to become a pastor. I have not read the book, nor do I know how much of the story is true and how much is fictionalized.  What I do know is this is a unique twist on the faith-based movie genre that taps into a desire many have to fight the bad guys and come out victorious.

In this film version, successful wrestler Chris Samuels, who fights under the title The Saint, leaves his wrestling career behind to become a pastor at a small town church with lots of problems.  The neighborhood is on the other side of the tracks and many unsaintly characters are hanging out on the streets.  The church congregation has diminished down to a handful and most of the finances are being donated by one man, Judd Lumpkin, who believes that gives him the right to control everything.  And to top it all off, Pastor Chris has a hard time delivering a good sermon and the church choir is tone deaf.

This story has a subtle sense of humor that pushes the characterization over the top creating a light-hearted look at otherwise difficult situations.  Pastor Chris first has to do battle with the pompous and controlling big donor, Judd Lumpkin.  Then, in a case of being in the right place at the right time, Pastor Chris rescues a prostitute from a beating being delivered by her pimp.  Later, Pastor Chris comes to the rescue at a robbery in a diner.

When it comes to fighting for the survival of his church, Pastor Chris is coached by an elderly church member they call Ms. Edna, played by veteran actress Diahann Carroll.  Ms. Edna convinces Pastor Chris to get back in the wrestling ring to earn the money needed to keep the church alive.  What we end up with is a pastor who is a wrestler on the side and a vigilante being investigated by the police in his spare time.

The Masked Saint is a well-made film, with good cinematography, quality directing, and some top-notch acting.  The wrestling scenes, like much of this film, are a little over the top, but nicely designed and photographed.  This is a fanciful story about a pastor becoming a part-time crime fighter.  Rather than trying to pass this off as a plausible true life story, a decision was made to develop this concept as a fantasy with a thin line of truth.  Much of the exaggerated circumstances that drive this story have enough realism in them to create a spark of possibility.  In the end, what really comes to life is the idea that complaining accomplishes nothing.  Problems are solved by those who take action.

← Until Forever
Saved by Grace →