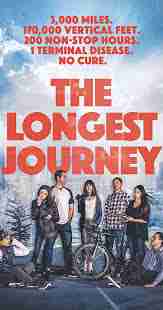 Huntington’s disease has been described as a culmination of Parkinson’s, Alzheimer’s and ALS; all formidable challenges on their own.  In addition, Huntington’s often develops in younger people who are in the prime of their life.  “The Longest Journey,” is a documentary about Sharon Shaffer who began noticing the degenerative symptoms in her early 40’s.  Sharon is an extraordinarily positive person and uses her energy to bring awareness to this little known disease.  She is supported in her effort by her husband Renato, and her two daughters.  The film chronicles their most ambitious Huntington’s disease awareness event; a bicycle race across the United States known as the Race Across America.  In previous years, Sharon would take part as a crew member or navigator; however, in the race depicted in the film she is no longer able to take the week long journey and sends her family along with a group of friends to conquer the challenge.

This is a glorious example of how people who love each other will go the extra mile, and in this case it’s an extra 3000 miles.  For a movie about a horribly debilitating disease this is a wonderfully uplifting film.  Inter dispersed between the story of the bike ride across the country, Sharon’s doctor describes all the details about Huntington’s and what the outlook in the future might be.  Sharon is also prominently featured discussing what it’s like to experience Huntington’s and how important the support of her friends and family is to her ability to cope.

“The Longest Journey,” is an inspiring way to learn about Huntington’s and a wonderful celebration of the power of family and friends.  In the end, Sharon reveals the secret of her amazing positive attitude – love.

(The film has no overt Christian theme and there is some profanity.)

← Preaching and Teaching
The Empty Tomb →