The Humbled and the Exalted 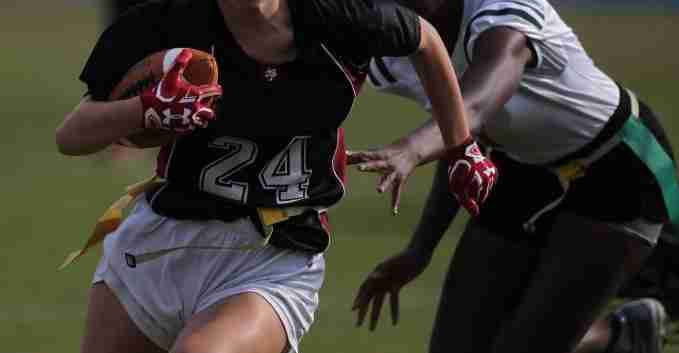 CHAPTER THIRTEEN in the story of college students Josh & Emily discovering lessons from the Parables of Jesus.

The Humbled and the Exalted

The sun was out and it was a beautiful Saturday on the local football field.  A group of high school and college students swarmed the field in preparation for a friendly flag football game organized by Faith Bible Church.  It was scheduled to be a boys against girls game, with no special consideration for the girls who insisted they didn’t need any help to win.  They figured since it wasn’t tackle football and there wouldn’t be any aggressive blocking, they would be strong contenders.

The boys’ team was about twenty strong guided by the local high school football coach, Bill Watson.  On the other side of the field, the girl’s team was also about twenty strong and guided by the local high school girls soccer coach, Beverly Conrad.  Josh and Emily were part of the fun and had played a major role in organizing the event.  Nothing was on the line.  There was no trophy.  There was no prize money.  This game was solely being played for the fun of it.

The boys already had eleven players on the field with the rest of their team waiting on the bench.  Coach Watson was on the sideline clapping his hands, fired up for a little competition.  The boys’ team captain was the local high school quarterback.  Tall, confident, and impressive looking.  He huddled the team on the field, including Josh, together for a little strategy talk.

“Let’s be good sports,” the team captain encouraged.  “We don’t need to totally dominate the game.  This doesn’t have to be a blow-out.  We can give them some room to score a few points,” he said.

On the other side of the field, eleven girls were huddled up as their team captain, a local college star soccer player, was setting the tone for their basic strategy.  “All of these guys played football in high school,” she said.  “Some of them are still playing in college.  If we want to win, we’ll need to distract and destroy,” she suggested with a good measure of aggressive enthusiasm.

Emily was not yet on the field.  She sat on the bench waiting for her opportunity to play.  The girl’s team was deep with talent and Emily would have to wait her turn.  She watched as the referee, wearing the typical black and white striped shirt, took the field and was joined by Coach Watson and Coach Conrad.  All three gathered together at center field and Coach Watson was quick to offer the girls a little head start.

Coach Conrad smiled.  “Thank you,” she said.  “That’s a nice offer, but we want to play without any special consideration.”

Coach Watson nodded his agreement and the referee asked him to call the coin toss.  The girls won the toss and Coach Conrad elected to receive the ball.  It was time to get things underway.  Josh moved to one end of the field as his team prepared to kick the ball and the girls moved to the other end of the field with two girls going deep, ready to catch the opening kickoff.  Emily was on her feet with the other girls on the bench, cheering on their team when the ball was sent high in the air by a kick from one of the boys.

A tall girl with strong looking legs made the catch and began working her way downfield with the ball tucked under her arm.  Her moves to avoid her flags being pulled were a bit unorthodox.  She spun, jumped, and squatted in what looked like a modern dance routine, weaving her way in and out of the boys swarming around her grabbing at her flags.  Her unique effort carried her to the forty yard line before a flag was pulled and the whistle sounded.

The game continued in what turned out to be a fairly balanced competition.  Not the blow-out some were predicting.  At half-time, the score was tied at fourteen to fourteen.  Both teams were taking some time to hydrate and Emily saw an opportunity to connect with Coach Conrad.

“Did you get my email about next week’s mentor meeting?” Emily asked Coach Conrad.

“Yes, I’m looking forward to it,” the coach replied.

“The church has never had a mentoring program before and I think a lot of young people are going to benefit from your professional advice.”

“I think most professionals are thrilled to help young people grow,” the coach offered.

Before their conversation got going, the referee’s whistle blew and the game was back on.  Coach Conrad sent Emily out onto the field for the second half.  “This is it, Emily,” she said.  “Go get ‘em!”

It was once again the boys’ turn to kick and Emily was sent deep to catch the ball for the girls.  The kick was high and dropped directly into Emily’s arms.  Without any hesitation, she began making her way downfield dodging the boys, and spinning around to protect her flags from being snatched.  As she crossed the twenty yard line, she heard a strange sound coming from the grass in front of her and behind her.  Without warning, sprinklers popped out of the ground all over the field and began watering the grass and all the players.  Everyone made their way to the sidelines to find the dry zone.

It took quite a while to get the sprinklers turned off.  The football season had only recently ended and as a result, the field was not in great shape.  There were several bare spots in the grass that were now mud puddles.  By the time they got to the last play of the game, both the boys and girls were covered in mud.  With only a minute left on the clock, the girls had the ball at midfield.   The boys looked fresh even though they were covered in mud from head to toe.  The girls were huddled up planning their final play.

“Emily, you seem to be the best a catching the ball,” the team captain announced, with everyone seeming to be in agreement.  Emily was flattered.  “You run to the end zone and I’ll throw it as hard as I can to you,” the team captain concluded.

“Can you throw that far?” Emily asked with sincere concern.

“I don’t think so,” was the team captain’s response before clapping her hands to break the huddle.

On the other side of the line of scrimmage, the boys had also huddled up to plan their defense.

“We know they’re going to try a long pass,” the boy’s team captain suggested.  “But they can’t throw and they can’t catch, so if we just make sure we cover their receivers we’ll end this thing in a tie and nobody’s humiliated.”

Josh was not on the field.  He was on the bench watching from the sidelines.  He didn’t much care about winning so he was secretly rooting for Emily and her team.  He watched as the boys and girls lined up at the line of scrimmage.  He watched the ball snap.  He watched the girl’s captain fade back to pass.  He watched Emily run for the end zone with a defender all over her.  It didn’t look good.

With boys all around her, the girl’s captain had no more time to wait and had to throw the ball.  She pulled her arm back and gave it everything she had.  As the ball took to the air, Emily was approaching the end zone and both her and her defender were about to step into a major mud hole.  The ball was on target and Emily was ready to make the catch, but her defender was still all over her.  Then they hit the mud puddle and the defender went down.  The ball was dropping straight into Emily’s arms.  Then she slipped in the mud as well, and was on her way down when the ball landed in her arms right before she hit the ground.  TOUCHDOWN!

Josh was unable to contain his delight and celebrated on the sidelines as the rest of the boys sulked in disappointment.  He watched Emily peel herself off the ground and carry the game ball back to her team as they all surrounded her with hugs and high fives.

When the celebration was over and all the players had made their way back to their cars, Emily found herself alone with Coach Conrad walking toward the parking lot.

“How did you keep that ball in your hands?” the coach asked.

“Well it was still a great catch!” the coach concluded.

“I’ll see you Wednesday for the mentor’s meeting,” the coach said as she turned toward her car.

“The fact that you coached this team to victory is clear evidence of your mentoring skills,” Emily offered.

The coach responded while walking backwards toward her car.  “I didn’t do anything,” she said.  “You girls did that on your own.  I learned more from you guys today, than you did from me.”

Coach Conrad climbed into her car just as Josh caught up with Emily and they both walked toward his waiting Toyota Corolla.

“I knew you guys would win,” Josh said.

“Because it didn’t mean as much to you as it meant to the boys.”

Emily took a moment to consider Josh’s theory before offering her own conclusion.  “Or we just got lucky,” she said.

Where will you go next in your walk with Jesus?\

CHAPTER FOURTEEN – Submit to the Will of Jesus ← Your Reward is in Heaven
Submit to the Will of Jesus →