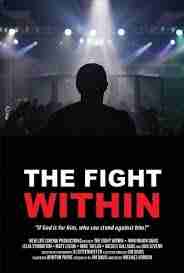 It’s always refreshing when you find a faith-based film that travels in a unique direction.  “The Fight Within” mixes the tough and gritty world of MMA fighting with the everyday struggle we all face, overcoming our demons.  Some of us are more in a fight with ourselves than anyone else, and those who have not yet found God are often in a fight with God.

Logan Chandler, a young college student, works as a trainer at an MMA gym that he and his brother inherited from his now deceased father.  Before his father’s death, Logan trained with his father who was once a champion.  Because his father believed Logan had that same talent, he pushed him hard to become a champion himself.  Tragically, Logan’s father died during a training session with Logan.  Faced with always wondering if he was somehow to blame for his father’s death, Logan battles inner voices of doubt.

After a good deal of success in the octagon, winning all of his fights, Logan makes a decision not to fight anymore and stick to training other fighters.  This becomes a problem when the current champion, Hayden Dressler, who happens to train with Logan’s brother at their gym, is offered big money if he can get a fight with the previous champion, Logan. The gym is not a large money maker and the prize money from the fight can help his brother pay the bills, but Logan is adamant about not fighting.  This disappoints his brother who needs the money, and only serves to encourage Hayden to constantly taunt Logan at every opportunity.

The story becomes more complicated and interesting when Logan meets an energetic young girl at his college, Emma Jones.  There is instant chemistry between the two that quickly turns to confusion for Logan when he learns Emma is a devoted Christian with a determination to become a missionary in Africa.  Logan is an unbeliever and now has to wrestle with God to understand why he has been sent down this road.  Emma patiently walks Logan in the direction of Christ and over time he gives his life to the Lord in an alter call at Emma’s church.

This budding romance seems to be pushing Logan in a completely new direction, until Hayden shows up again, this time taunting Emma to try to force Logan to fight for the big money prize.  Going after Emma is the last straw for Logan and he finally agrees to the fight.  Logan’s brother goes to work training him for the big fight and the inevitable victory.  Logan has conquered his battle with God and with himself, punctuating the transformation with a decisive victory over his worldly nemesis Hayden.

The Fight Within is an innovative bit of storytelling that looks at faith from a totally new perspective.  I could quibble with some of the story elements that tended to abbreviate deeper character development, often with a music montage.  Nevertheless, the overall narrative held my attention and triggered honest emotions.  Some of the best scenes were the well-choreographed fight segments.  That bit of realism served as a conduit to pull me deeper into the story. This film has a nice mix of faith, romance, and action.