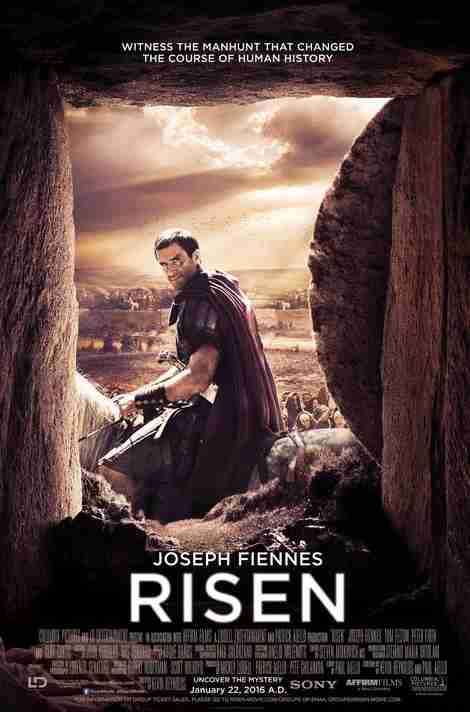 “Risen” is the story of a Roman Tribune, essentially the captain of the guard, an officer in the Roman army, who is tasked with making sure Jesus is dead after his crucifixion.  After making sure the dead body is sealed in its tomb, the Tribune walks away leaving two guards posted over- night to make sure no one tampers with the tomb and steals the body.  When the tomb is found empty the next day, the Tribune is of course in deep trouble.  His life now depends on finding the missing body and those who somehow carried it away.  The Tribune’s investigation uncovers the story of the resurrection of Yeshua, and in his effort to discredit this tale and uncover the truth, he comes face-to-face with the living Messiah.  Now a changed man, the Tribune helps the disciples make their way to Galilee where they are once again to meet with Yeshua.  The Tribune again encounters Yeshua in Galilee and witnesses him performing miracles as well as his ascension into Heaven.  In the end, the Tribune does not stay with the disciples as they go on to preach the Gospel, instead he goes his own way, in the opposite direction of Rome, seemingly in a search to find his new self after his amazing experience.

I thoroughly enjoyed hearing this story told from this completely new perspective.  There are a few things I could quibble with in this interpretation, but for the most part I found it to be a very well-told story that did not intrude on my own understanding of the Gospel.  Here and there some of the dialogue was frankly a little silly, however, not often enough to spoil the rest of the film.  Overall this is a well-made movie – superb acting, beautiful camerawork, great directing, costumes, sets, special effects, and music.

There is a fairly graphic battle scene at the beginning of the movie and some other gruesome stuff at the crucifixion, as well as some graphic scenes of decomposing dead bodies later in the story.  These realistic depictions of the time only serve to make the story more believable to me, but I can understand how some might see it as unnecessary – to be fair – it is tasteful graphic violence – not over-done.

I don’t know that I’m really interested in seeing more stories conjured up from the peripheral characters in the Bible.   It seems to me that runs the risk of fictionalizing what for me is a true story; however, in this instance I found the journey an intriguing “what if” scenario.

← Reimagining Evangelism
What does God Want from You? →