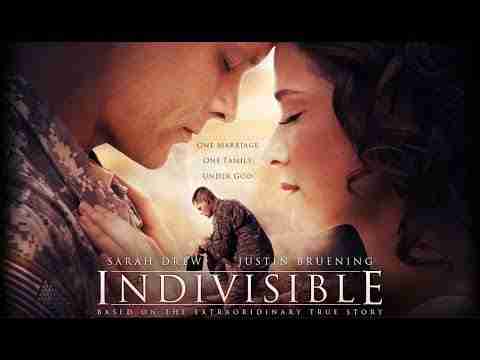 When soldiers go off to war and come face-to-face with life and death situations on a daily basis, their lives are changed forever.  What often gets overlooked is the emotional toll their service takes on the lives of family members left behind.  The film Indivisible is the true story of Army Chaplain Darren Turner.  Fresh out of seminary, Turner is sent off to the war in Iraq, leaving his wife Heather and three young kids behind.  Turner is assigned a 15 month deployment that will test his ability to adapt to the tragedies of war while trying to remain close to his family thousands of miles away.

As an Army Chaplain, Turner has to regularly confront death and the fragile emotions left behind in the hearts of the soldiers he is assigned to serve. At the same time, his wife Heather has volunteered to take on the task of ministering to the needs of the wives of soldiers left behind.  The distance and difficult emotions they both endure begin to wedge apart their relationship.  When Turner comes home, he is a different man, suffering from PTSD that makes it almost impossible for him to reconnect with Heather.

“Indivisible” weaves the story of the Turner’s struggle together with the stories of other soldiers and wives who they come into contact with.  Together, these stories paint a powerful image of the tragedy of war and how it plays out in the lives of those who serve on the battle field and those who wait for them to return home after the war.

This is a well-produced film with great acting, directing, and a good musical score.  There are many inspiring moments of faith played out in the lives of the men and women serving in Iraq, as well as the lives of the family members left behind.  Indivisible is a sobering look at the cost of war and the awesome sacrifice made by those who choose to serve.

← Youth With A Mission
The Words and Works of Jesus Christ: A Study of the Life of Christ →