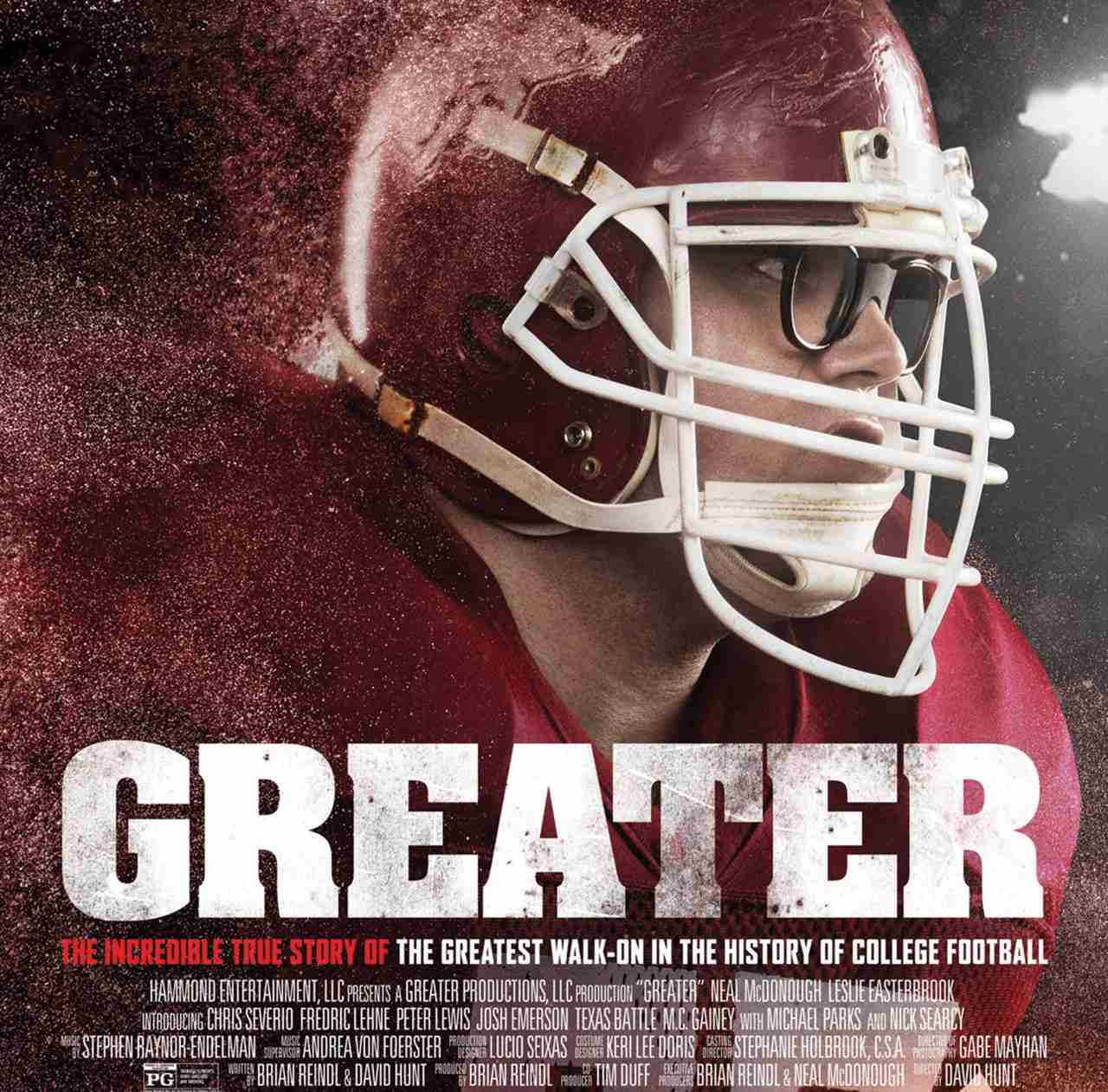 “Greater” is the true story of a young man, Brandon Burlsworth, who goes against all odds to become an NFL football player.  The film opens on Brandon’s funeral and continues by going back in time to tell his story.  As a young boy Brandon is overweight and often ridiculed as the fat kid.  He doesn’t have much athletic talent but he has a dream to play for the Arkansas Razorbacks college football team.  Playing football in a youth football league, his coach never really gave him a chance.  His high school coach was impressed with Brandon’s determination and gave him the attention he needed to develop real athletic skills.  While he was not considered good enough to play for the Razorbacks, his high school coach was still able to get him an appointment to visit the school.  During Brandon’s visit, the Razorbacks coach lets him know there’s no way he will ever make that Division One team because he’s not big enough.  Brandon takes this as a challenge and gains weight to be what he thinks is big enough.  Unfortunately, the Razorback coach was looking for muscle weight gain, not fat weight gain and Brandon was still unable to qualify to play for the Razorbacks.

Undeterred, Brandon, with the help of his mother taking out a second mortgage on her home, joined the Razorbacks football team as what is known as a walk-on.  A walk-on is a player who pays his own way at the college and is never expected to play in any of the games – they are only there to train with the team and help them get ready for game day. Overly fat, Brandon is bullied by the other players, and he has a hard time fitting in socially because he is a devoted Christian and not interested in typical secular college behavior.  Nevertheless, Brandon’s determination to prove himself and get a football scholarship is undaunted.  By working harder than anyone else, his coach took notice and gave him the extra attention and advice he needed to succeed.  Over time, Brandon became one of the best players on the team and received his scholarship to continue playing as a Razorback.  Brandon’s hard work and success was an inspiration to his entire team and he was instrumental in turning a losing team into a winning team.  Brandon went on to become an All-American and complete a master’s degree in business.  Brandon was selected in the 3rd round of the NFL draft with the Indianapolis Colts and was scheduled to be a starter as offensive guard.  Tragically, Brandon was killed in a car accident before his NFL career began.

This is a well told story and a celebration of a remarkable life.  The overarching theme of this film is how we cope with bad things happening to good people.  In the film, Brandon’s older brother, Marty, continually has a hard time dealing with Brandon’s tragic death.  Brandon’s mom, who is more devoted to her Christian faith, gets Marty to look at the bigger picture.  She lets him know that God has a grander view of our lives which are only a tiny moment in all eternity.  This message is subtly implanted throughout the film and plays well without being intrusive.  Brandon Burlsworth is such a likeable character you can’t help but enjoy this story.  While the film bounces back-and-forth between his funeral and the story of his life, it becomes clear that a celebration of Brandon’s life is more appropriate than anger over his death.  God called Brandon home.  There’s a void left behind in the hearts of those who loved him, but his legacy and memory will go on inspiring many others for years to come.

← Hope for those in Need
Reconnecting with God →