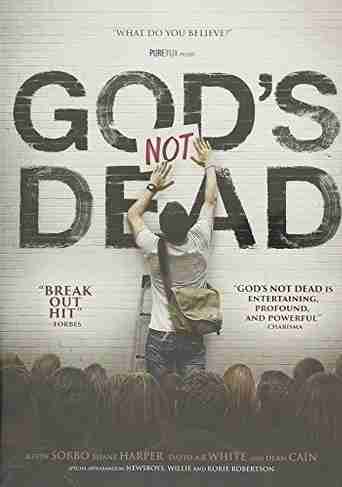 This story is about a young college student, Josh, who has a philosophy professor who challenges his students to sign a declaration that “God is dead” in order to pass his class.  Josh is the only student who refuses to sign the declaration.  As a result, the professor tells Josh the only way he can pass the class is to win a debate with him on the existence of God.  The professor tells Josh he will allow the class to determine the winner of the debate.  The debate takes place at the end of class in three different sessions.  Josh and the professor each make strong points in the first two debates, but in the third and final debate Josh is able to touch a nerve in the professor and get him to admit he hates God because of the death of his mother.  Josh is then able to present his winning argument – you can’t hate someone who does not exist.  The class pronounces Josh the winner of the debate – God’s not dead.

Many of us who believe in God are delighted to see the liberal professor defeated.  This central storyline is satisfying and makes the film worth watching; however, most of the peripheral characters, including the professor, are rather stereotypical.  While the debate between Josh and the professor is fairly well balanced with opposing points of view, this film overall is a stacked deck in the favor of an evangelical Christian point of view.  I would prefer to see a little more subtlety in the depiction of unbelievers, as opposed to the demonization this story leans toward.  In the end, these negative aspects of the film are washed away by a great performance by the contemporary Christian band Newsboys playing “God’s Not Dead.”