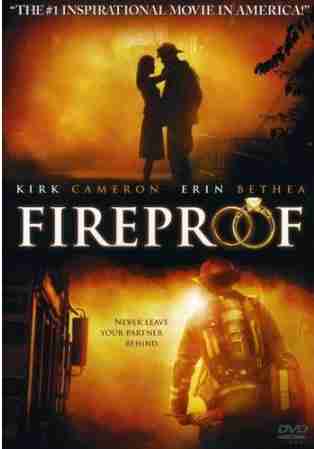 “Fireproof” is the story of a fire captain, Caleb, who is struggling through a difficult marriage.  Caleb and his wife Catherine are constantly arguing and have become distant living separate lives while living in the same house.  A major point of concern for Catherine is the fact that her mother needs expensive medical supplies to help with her stroke recovery but there is no money to cover the cost.  Caleb has a twenty-four thousand dollar savings account set aside for a boat but is unwilling to offer any assistance for the medical supplies.  When Caleb explodes in a moment of frustration with the deteriorating marriage, Catherine decides it’s time for divorce.

Initially, Caleb is also ready for divorce but his father convinces him to try one more time to make things right.  Caleb’s father gives him a book called “The Love Dare” which is a forty day step-by-step process to rebuild the love that has been lost.  Caleb agrees to the forty day effort because he loves his father, but he only makes a half-hearted effort to complete each daily task.  Caleb goes through several days of being extra nice to Catherine, buying her flowers, doing the dishes, and preparing dinner for her but she turns her nose up at every attempt to rekindle the relationship.  She also begins to flirt openly with one of the doctors at the hospital where she works as an administrator.

Halfway through the love dare, Caleb wants to quit but his father tells him they need to talk first.  During their conversation Caleb’s father shares the gospel and Caleb, who is an agnostic, realizes he needs Jesus in his life to truly understand love.  From this point forward Caleb puts his heart into the love dare but Catherine is still only suspicious of his changed demeanor and is still more interested in the doctor at work than Caleb.

When Catherine discovers the love dare journal, she is moved by Caleb’s effort but is still wounded by the difficult struggle they have been through.  She tells Caleb she needs some time to think.  In the end, when Catherine discovers Caleb has anonymously paid for her mother’s medical supplies with his boat savings, she is overwhelmed with gratitude and reconciles with him.  She tells Caleb she is so impressed with the change in his life that she wants to know Jesus as well.  They end up renewing their wedding vows in a ceremony that includes God.

Kirk Cameron, who plays Caleb, does an outstanding job portraying the angry and selfish husband who is transformed into the loving Christian husband.  He is supported by Erin Bethea, playing his wife Catherine, who also turns in a fine performance.  The story is likely familiar territory for anyone who’s married; most have gone through difficult times and been at odds with each other at some point.  This film makes the point that a marriage isn’t something you allow to burn to the ground; you try to put out the fire and rescue the relationship.  The love dare takes you back to what sparked the relationship in the first place and walks you back toward the lost love.  Of course, the love dare is only part of the equation; this story also makes the point that the main ingredient in a marriage needs to be a love for God.