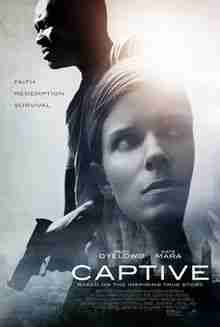 Movies made from true life stories often are nothing more than dramatized history.  Not so with Captive.  This is an honest depiction of two lives traveling in different directions that collide into one night of unexpected transformation.  Captive is not dramatized history, it’s a well-executed character study that makes no overt conclusions.  The story is developed in such a way that the audience is allowed to see inside both of the main characters and make their own analysis of how and why they are the way they are.

Brian Nichols is on his way to court accused of rape.  He believes he is being accused of a crime he didn’t commit and has no more patience for what he views is an oppressed life.  In an explosion of rage, he takes advantage of a trusting jailer, beats her to the ground and grabs her gun; he then murders three people before escaping in a hijacked car.

Brian eventually makes his way to an apartment complex late at night and encounters Ashley Smith, a recovering meth addict.   Brian follows Ashley back to her apartment where he takes her hostage for the next seven hours.  During this time, Ashley, who desperately wants to end her drug addiction to regain custody of her young daughter, begins reading Rick Warren’s book, “The Purpose Driven Life,” more as a nervous impulse than anything else.  When Brian notices she is reading, he demands she read out loud to him. God has not been a driving force in either of these lives, but now he is present and working inside both.

Captive is structured more as an experience than it is a movie.  The script, the camera work, the direction, the acting all work together to place the audience directly in the apartment with Brian and Ashley.  How did Ashley let drugs get in between her and the deep love she has for her daughter?  How did Brian allow his life to tumble into total darkness?  What role will God play as Rick Warren preaches from the pages of his book?  This is a fascinating story beautifully developed into a mesmerizing film.