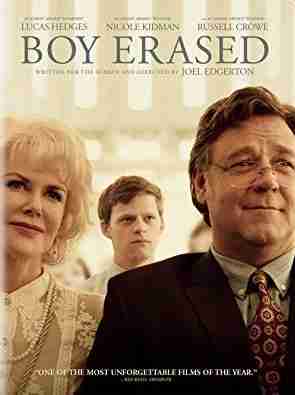 Not everything found in the Bible applies precisely to the world we live in today.  Some things need to be understood as proclamations for the time in which they were written.  Of course, there are many who will not agree with that point of view.  My best guess is about half of all Christians will understand the context of the experiences presented in Boy Erased and the other half will not.  Those who take the time to watch this film and learn from this true life account of actual events, may come away with a new perspective.

Boy Erased is based on the true story of a young man, Jared, whose father is a Baptist preacher.  As a teenager, Jared is tormented by same sex attraction and the desire to act on those impulses.  Of course, the traditional point of view in the Baptist church is that homosexuality is an abomination.  For this reason, Jared hides his feelings from his parents until circumstances force him to reveal the truth.  In the mind of Jared’s Baptist preacher father, there is no Biblically acceptable reason for someone being gay; it’s not possible that God created Jared as a homosexual.  As a result, the only appropriate course of action it to send Jared off to gay conversion therapy.  Jared needs to be changed back into the normal boy God created.

Over the course of this experience, Jared’s mom gradually realizes conversion therapy is in essence, a scheme perpetrated by well-meaning people who have simply lost their way.  She eventually comes to the understanding that God created Jared to be gay – and God doesn’t make mistakes.  It takes a little more effort to convince Jared’s father of the same truth, but in time he comes around as well.

The acting in this film is absolute perfection.  Every cast member is completely believable, leaving the impression you are watching a documentary rather than a fictionalized reenactment.  I have to admit that the story telling moves along at a leisurely pace and could have possibly been filled in with a little more character development; however, I personally believe this is a profoundly important story and the slower pace is worth the effort to watch.  I do not personally believe that gay people can be converted.  This film may help some realize the truth of that statement.

← The Teachings of Jesus
Run the Race →